Community College as a Pathway to a Bachelor’s Degree

What the Numbers Say

Using a private dataset from the State Council for Higher Education in Virginia (the same one used in our recent report, The Effects of Rising Student Costs in Higher Education: Evidence from Public Institutions in Virginia), we were able to study patterns in enrollment and student persistence at the commonwealth’s community colleges. We focused on first-time, full-time students who enrolled in Virginia’s two-year institutions within one year of graduating high school, and among those, only on students who indicated at the time of enrollment that they intended to work toward a bachelor’s degree and who were academically prepared to enter college. This group of students only makes up 19% of all community college students; however, this is the group of students that we would most expect to succeed on the path from a community college to a bachelor’s degree. Virginia is fairly typical of many other states, so the findings here should shed light on challenges facing community colleges around the country, not just those in Virginia. 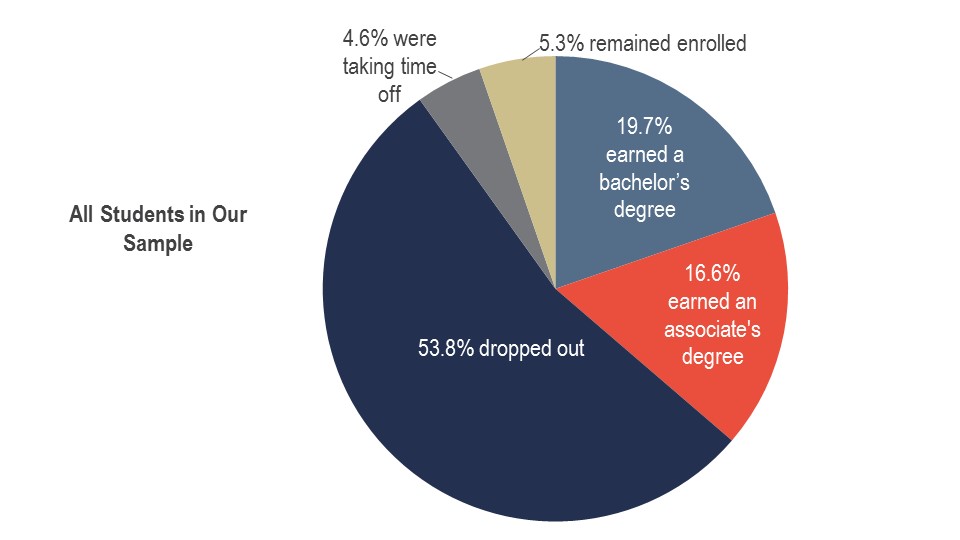 For the 5,489 students in the lowest income quintile, these numbers are even more discouraging: 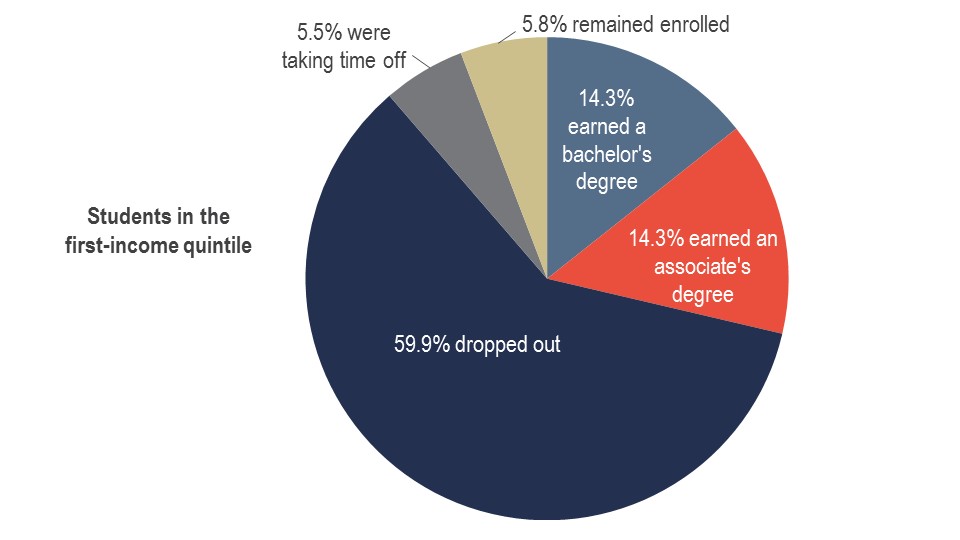 Obviously, overall numbers like these should not be used as a final measure of community college success. There is much more nuance to how students move through the system than that. For one, most students who earn a bachelor’s degree on this track do not do so within four years, and thus looking at four-year and six-year graduation rates is not a good indication of success. (The four-year graduation rate of this sample is only 9% and the six-year rate is 17%.) Second, many students who do not earn a bachelor’s degree still go on to earn an associate’s degree and/or are still working towards a degree at the eight-year cutoff point.

Moreover, many of the barriers to success for this pathway are not the result of what the community colleges themselves do or do not do.  In fact, for most community colleges, the biggest challenges come from the lack of college readiness of the students they serve and the economic conditions of the regions in which they are located. Thus the patterns described above present a challenge not just for these institutions but for all of us committed to improving the pathway from a community college to a bachelor’s degree.

However, these caveats do not diminish the importance of the fact that 54% of these students have dropped out of college and only 37% have obtained a degree of any kind eight years later. The most common time for students to drop out is during or after the first year – 8% of all students drop out at the end of the first semester and another 10% leave at the end of that first year. Clearly, something is happening – or not happening – in that first year of community college that discourages a great many students from following the supposed pathway to a college degree.  And, remember, these numbers are for students who enrolled initially as full-time students and who indicated their intention to use community college as a pathway to a four-year degree. The numbers are much lower for students who enrolled with less ambitious goals.

First, many students entering community colleges are not as academically prepared for college work as their peers at four-year institutions. 22% of students in our sample took remedial courses in order to prepare themselves for college-level courses as part of their community college course load – for which they received no college credit. Academic and student support issues, such as advising and the design of remedial courses, require significant improvement at most institutions if we are to give students a realistic chance of achieving their academic and professional goals. In addition, we need to modify our expectations for time to degree when students have remedial course requirements they need to meet.

Second, costs are a significant barrier for many students. While free tuition may eliminate some of the financial barriers students face, in Virginia, tuition represents less than 20% of a student’s estimated cost of attendance; other expenses including textbooks, housing and commuting add up to much more than the still relatively modest tuition charges. Currently, financial aid does little to cover these expenses which may be more of an impediment to student progress towards a degree than tuition.  Moreover, if the average time to degree is likely to be longer for these students, we should consider extending the time of eligibility for need-based financial aid to account for students who are making progress toward a degree, even if that means taking more than four or six years to do so.

The point of all this is that increasing enrollments and providing free tuition at community colleges is not a panacea for solving the educational gap that exists in this country. We do believe that expanding the role of community colleges in closing this gap is important and worth supporting, but it has to involve much more than free or low tuition.  It must also involve appropriate investments to reduce the financial AND educational barriers that currently impede the progress of too many students in order to significantly raise student success rates. In fact, President Obama’s proposal for free community college also includes components that are intended to address these barriers. As this proposal moves forward, it is very important that we all pay close attention to the whole proposal and not just the free tuition part. Turning what is currently a blind alley for most students into a viable pathway to student success will require a major effort on the part of community colleges and those who support them, but it is absolutely essential if we are going to encourage more students to begin this journey.

Please see our related blog post for more information about degree attainment at other income levels.

Do you have a pie chart for the other income groups? Maybe comparative graphs to show how (I suspect) that with higher incomes comes higher degree success?

Thanks for this great question. We do have a graph that helps illustrate the data and speaks to your point. Please see our latest blog post for more information: http://sr.ithaka.org/blog-individual/how-income-related-community-college-bachelor%E2%80%99s-degree-pathway